This is a breathtaking two-day trek in the Vilcanota’s Cordillera, on a route we call the “Camino Del Apu Ausangate” located in close proximity of the highest Sacred Mountain in the Department of […]

This is a breathtaking two-day trek in the Vilcanota’s Cordillera, on a route we call the “Camino Del Apu Ausangate” located in close proximity of the highest Sacred Mountain in the Department of Cusco. The “Apu” is the Bearer of Life and Guardian of one of the most pristine mountain ecosystems in the world.

Our treks will be accompanied by lamas and horses that will carry our gear, and are owned by shepherds of the community of Chillca, who are proud to share their land with us, as well as the Spirit of their inspiring world.

On our hikes and in our unique “Tambos” or Andean Lodges, daily meals will be prepared by experienced chefs who will introduce you to a great variety of delicious Peruvian dishes and products. 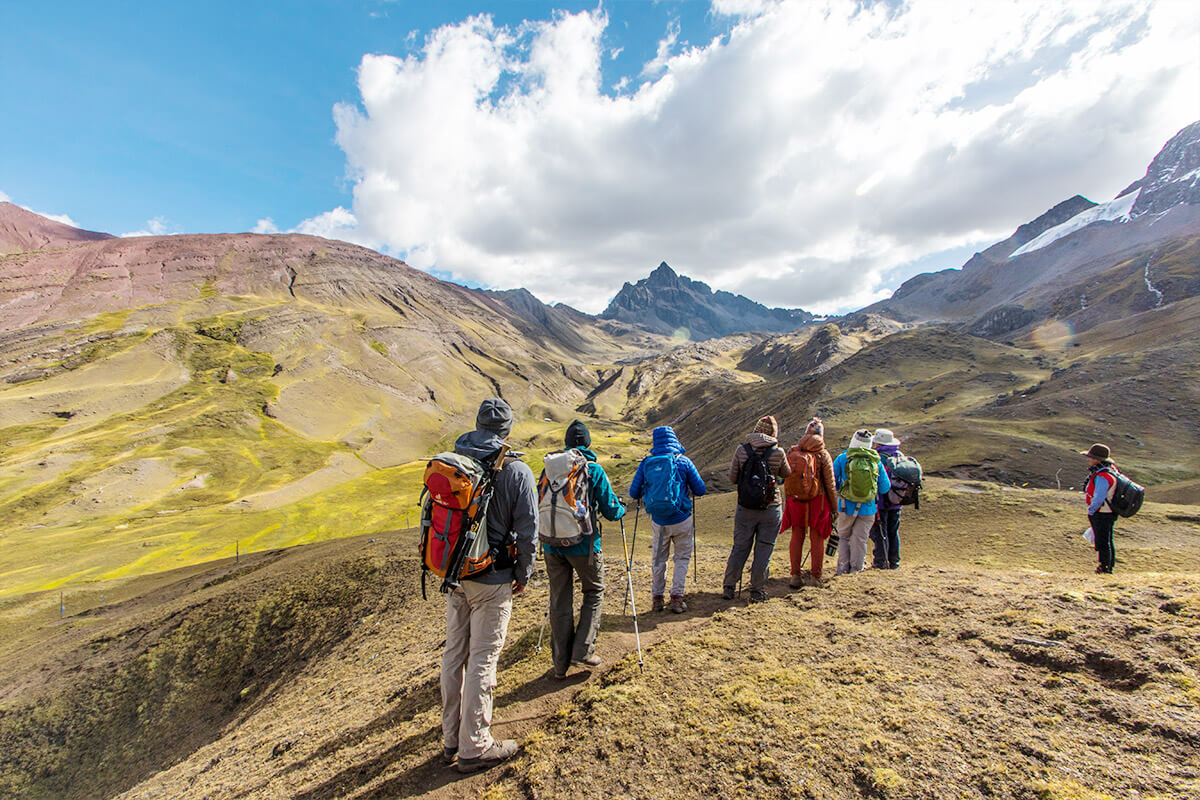 We begin with a morning departure from Cusco, travelling by bus through the fertile Vilcanota Valley, to the town of Checacupe, from where we start to ascend Pitumarca. Through the spectacular canyon of Japura, we arrive at the pastoral community of Osefina, where we see herding of llamas and alpacas as the main local activity. Llamas will carry part of our personal equipment. Little by little, we will ascend through a picturesque valley where you can see some of the highest potato crops in the world. The landscapes change drastically as we leave behind the last houses until we reach the pass of Anta (16000 ft. / 4900 mt.) With the first views of the Vilcanota mountain range. We will spend the night in the Huampococha Tambo, located near the lagoon of the same name, where they usually nest "Huallatas" (Andean geese).

The first rays of the sun greet you at this magical location. After enjoying a hearty Andean breakfast, we begin to hike through formations of red sandstone. As you hike you’ll witness geological wonders and admire the beauty of this unique landscape, to reach Mt. Vinicunca or “Rainbow Mountain”, renowned worldwide and one of the most spectacular vantage points of the Route and of the entire Andes Mountains. After time to rest and take in the amazing colors of the mountain, we begin the descent through the valley to Japura. On the way we’ll have our final lunch stop, before taking transportation back to Cusco.