The use of Coca leaves in Andean culture and religion goes back centuries, and its importance is still recognized to this day.
Many mummies and statues scattered around South America have been found with small bulges on their right cheeks, representing daily and normal use of coca leaves.
Many indigenous Andeans still make offerings of coca leaves to the Apus, or mountain spirits, before embarking on any journey, and to seek their blessings.

The benefits of coca leaves
The plant is deeply embedded into daily life in the Andean region. Along with its cultural use, local people also use it for its various health benefits and to treat a variety of symptoms.
The leaf is considered a source of energy, since it relieves hunger and thirst, and provides a boost of energy. It’s also used to treat altitude sickness, which is common among tourists and those who are not used to the high altitude of the Andean environment.
We recommend chewing coca leaves or having coca tea while trekking in order to avoid the various symptoms of altitude sickness.

While nowadays people tend to relate coca leaves with cocaine, these substances are very different in both their composition and effects.

Differences between coca leavesand cocaine
The biggest and most obvious difference between the ingestion of coca leaves and use of cocaine is in the effects they have on the human body.
Coca leaves contain the psychoactive alkaloid called cocaine which is the main raw ingredient needed to produce cocaine, the illegal recreational drug.
However, in order to understand the differences we must keep things in perspective. The alkaloid content of coca leaves is quite low, between 0.25% and 0.77%.
It takes 370 kilograms (or 815 lbs.) of coca leaves to produce one kilogram (2.2 lbs.) of cocaine.
The coca leaf itself is legal in many regions, and is regulated by the governments of Peru, Bolivia, and Argentina. While those governments defend the traditional use of coca leaves, they are continually working to eradicate its illegal production, and most especially, to put a stop to the production and distribution of cocaine.
In Peru, you can buy a variety of edibles containing coca leavesas a main ingredient in many different stores.
There are tea bags, candies, chocolates, beers and many other products that contain extract of coca leaf (but of course, not cocaine).
Although such products are not illegal in Peru, nevertheless, you should take precautions in bringing back any coca-derived goods back to your home country, where they may be confiscated at ports of entry, especially the leaves themselves. 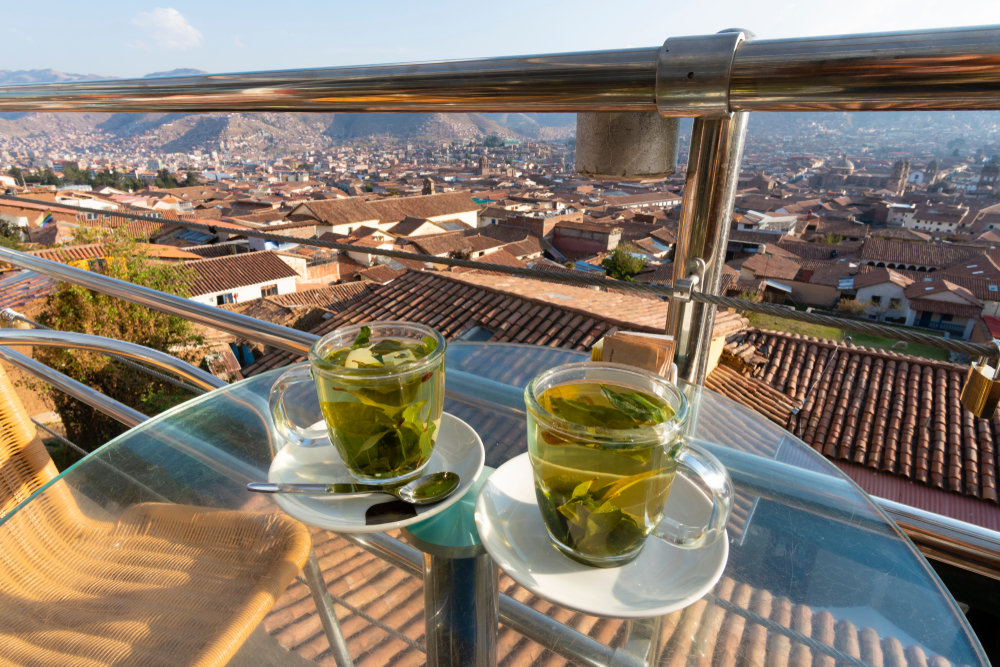 Coca tea can either be prepared from loose leaves or from tea bags to be consumed by the cup, or via a straw, like yerba mate. Taste-wise, it is a rather mild herbal infusion, somewhat like green tea.
Coca leaves can also be chewed. You can put several leaves a wad into your mouth and hold it in your cheek, where you slowly chew or suck on it for a few minutes, before finally spitting the leaves out.
The stems should be removed to reduce irritation inside the cheek. To improve extraction of the alkaloid in the mouth, a small amount of an alkaline substance can be added (traditionally called ilucta or llipta), such as the ashes of quinoa or another plant although baking soda may be used instead.
The coca leaf is, without a doubt, a treasured tradition in the Andesand it is still commonly used to help trekkers, hikers and even local people to better endure long hikes along high trails in the Andean mountains.
While problems related to cocaine use have overshadowed the importance of the coca leaf, this traditional plant, sacred to both the Incas and to today’s Andean indigenous people, is still very present in the everyday life of Andean communities.
We recommend keeping its several benefits in mind when you visit us at Andean Lodges.

Find out the latest news

Operation team made up of community members trained as guides, kitchen staff, housekeeping, guardianship and maintenance.

Update on COVID-19 in Peru

Wayna Picchu: Looking forward to hiking there? Here’s what you should know